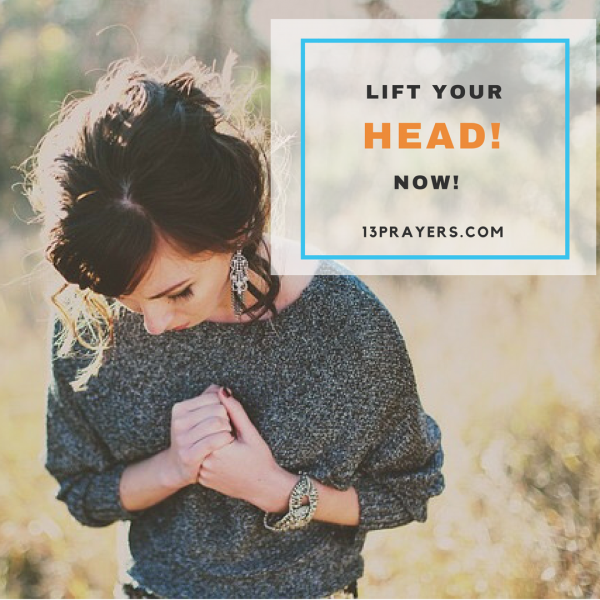 Get your head up, people!

One of the many things I learned while I was on my recent silent retreat was the difference between humility and defeat – an important thing since my head has been low for a while now.

No. I promise I had a real SILENT retreat that didn’t include any movie watching. That example came to me later.

Anyway, I’ve never had any trouble bowing before God. I have always been in awe of His majesty and power. I have been known to flatten myself in prayer. I’m not too proud to kneel before my King. To bow my head and keep it down. But He revealed to me that He wants more than that from me. From us.

A constant refusal to lift your head is a refusal to see Him as anything EXCEPT your King. He wants more from our relationship.

And I had forgotten that. I’d been trapped in a cycle of defeat that far surpassed humility. It was despair. And He doesn’t want our heads bowed in despair.

We have been adopted. He’s our Father. And He wants us to look up! He doesn’t want our relationship with Him to be defeat or fear. There are many examples in scripture where it was important for someone to lift their head. Let me give you 2 –

He lifts our head

As I promised in last week’s post, today we’re still focused on Psalm 3:3.

“But you, LORD, are a shield around me, my glory, the One who lifts my head high.”

God doesn’t want us to walk around, stooped over in defeat.

We are children of the one true God.

He lifts our head. And He lifts it HIGH. Not in arrogance or pride, but in the confidence that comes from Him.

Please allow Him to lift your head high today in the love that only comes from spending time with your Heavenly Father. Thanks for stopping by today. I’m praying for your focus to shift to Him who is Worthy.