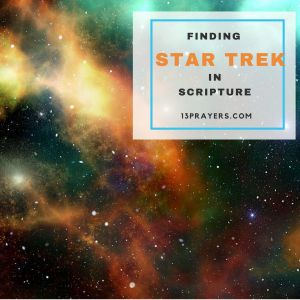 I found Star Trek on my silent retreat – in scripture.

Look out! I love Star Trek…

I’m a nerd. I admit it. And I am a huge Star Trek fan. I guess I like the idea of roaming among the stars in a ship filled with friendly aliens who all want to make the galaxy a better place. I’m certain my kids know far more about Captain Kirk than they want to admit. In fact, when Son was younger, he would tell me he wanted to be an astronaut so he could tell the aliens about Jesus.

What does this have to do with scripture?

Shields go up on Star Trek

Whenever things got scary or rough on the starship Enterprise, Kirk would always shout, “Raise shields!” In an instant a protective device wrapped the ship.

Since I started watching Star Trek as a child, that command to “Raise Shields” has been with me longer than I care to admit. So, when I was on my silent retreat, and I read, “But you, Lord, are a shield around me, my glory, the One who lifts my head high,” it hit me funny.

“You…are a shield around me.” That’s odd, considering the culture of the time. I’m not much on history, but I do know that a single warrior’s shield could only have protected him from a single direction. It couldn’t go around the warrior.

Before you run screaming from the room in a grammar-induced fit, prepositions are easy to identify. Most of them fit into the sentence: The baby crawled ____ the car. The baby crawled INTO the car. FROM the car. AROUND. BESIDE, etc. And every stinkin’ one of them makes a huge difference in what that baby does. If you don’t believe me, would you rather have your new iPhone IN the water or BESIDE the water??

Anyway… God is a shield AROUND me. In the moments of silence when I read this, I did get stuck on the preposition. I even admit I whined a bit about some of the things that apparently got through the shield and I was having to deal with.

God promptly thumped me on the back of my head.

What about the things God saved you from?

God’s prompt reply to my whining was this: What about all the things I kept from impacting you? What about the dangers I’ve kept you from and the hurts you haven’t experienced because My Hand was on you? What about donuts?

Yeah, okay. I guess I should explain that last one. It’s not that God is saving me from donuts. It’s that one day He sent me to get some. And I believe it saved my life.

Years and years ago when I was a single teacher, living in Edmond, Oklahoma, it was my habit to go to the post office prior to meeting my car pool for the drive to work. One morning, I was on my way there when I had the strongest sense that I should get donuts instead. I argued with that still, small voice – I don’t need donuts. I need stamps.

God said to get stamps later. I needed donuts.

My car pool was grateful for the treat. They even laughed about God suggesting them. Then, halfway to work, we heard the news that a gunman had shot up the very post office where I should have been.

I’m grateful I wasn’t driving. I was a quivering mess.

God put His Shield around me.

God’s shield was around me that day, and the news reporters told me why. But most of the time, the things He saves us from don’t make headlines. We have to listen and be obedient. And just maybe He’ll give us a glimpse every once in a while. Maybe not. But the shield is there, whether we see it or not.

Come by next week as I look at the rest of the verse, “the One who lifts my head high.”

Thanks for stopping by today. I’m praying that you’ll see God at work as He protects you with His shield and leads you. Blessings.