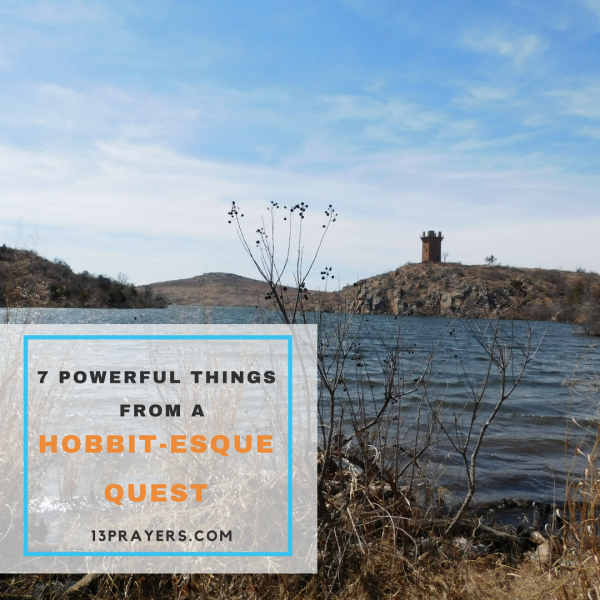 I took a hike recently as part of my silent retreat, and it was quite eye-opening.

Okay, maybe it wasn’t an epic quest like Frodo’s, but it was big and gave me a glimpse into the processes of God-at-work. And, for me, that’s epic enough.

As I planned my personal silent retreat weekend, I had decided early-on to include time in nature. So, that morning, I packed my backpack with my Bible and study notebook, pens and my camera. My intent was to go to the Wichita Wildlife Refuge and do my morning study time on a dock. 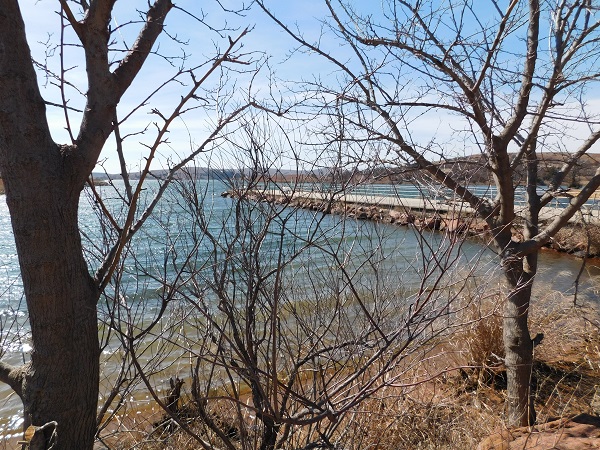 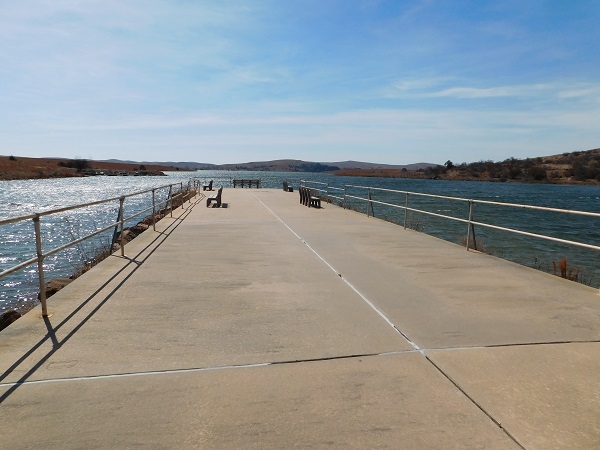 Sitting on a bench by a lake seemed like a great locale for my quiet time. Then I would hike up to one of my all-time favorite places on the planet: The Jed Johnson Tower.

The Oklahoma wind made my plans impossible.

God had other plans.

In Oklahoma, the wind often comes “sweeping down the plains.” But on this particular day, it wasn’t sweeping. It was almost unbearable. The last thing I wanted to do was to pull out my beloved Bible and risk exposing the thin pages to punishment. So, I sat in prayer instead. The clear message I heard repeatedly was to “Seek” and “Record.”

Since a paper/pencil thing wasn’t happening against the wind, I pulled out my camera and got busy. 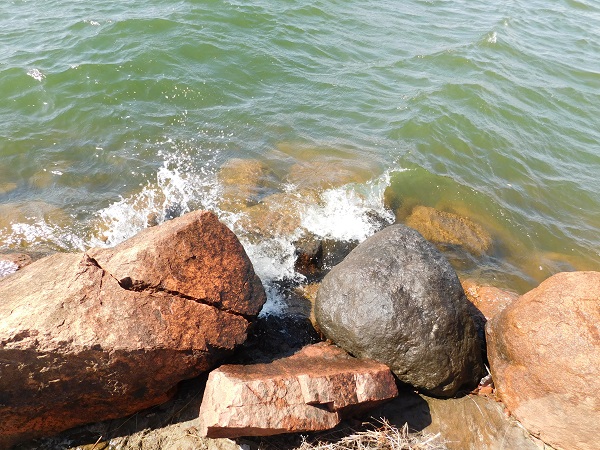 There were white-caps on this small lake. Waves – albeit small ones – crashed against the shore and rocks. I’d never seen that in this location.

In all honesty, if I’d handpicked a day to spend here, I would have never picked such a windy one. I would have rescheduled. But this was my one FULL day of my retreat, and I felt truly drawn to be there. So I focused on the water before leaving for my hike.

Time for my Quest

When I pulled up to the parking lot to start my hike, I noted another car already in place. That’s not very common for this location, and I began to feel uneasy. I didn’t want to deal with people and try to explain my silence or violate it. Then I felt an odd wave of fear for my personal safety. But I prayed about it, and still felt led to continue. I’m glad I did. Here are some things I learned:

Every step of planning for this retreat was met with resistance. Among other things, weather had forced a change in the date of a medical procedure for MIL, and it ended up being rescheduled to my retreat weekend. (Hubby ended up taking her, so God provided.) I arrived at my hotel to find it was under a remodel. An hour after checking in, the fire alarm sounded. I later learned it was dust from the construction, but it was a bit unnerving, and I had an impulse to just go home. (More prayer, and God said to stay.) Now, I was on my quest, and I was fearful. Again.

What if I was overpowered on the trail? I’m alone. I’m not speaking. I would be seen as an easy target. But God provided the peace to continue.

The trail begins beside a different lake. The path is level. Mostly. It’s more common to find wild longhorn cattle 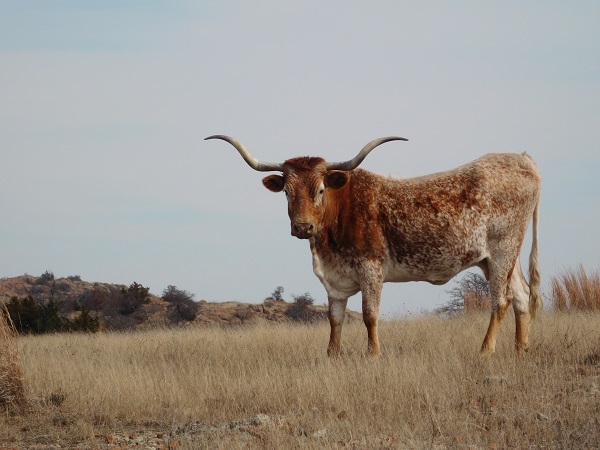 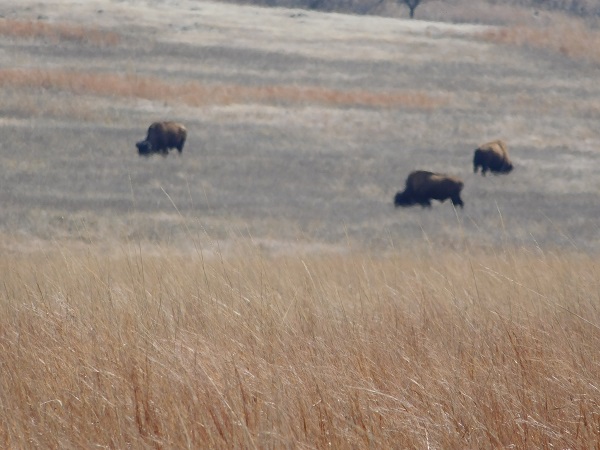 on the trail than other hikers. And one should always stay on the path and be watchful for snakes. But I love this area.

The Lord is a strong tower. 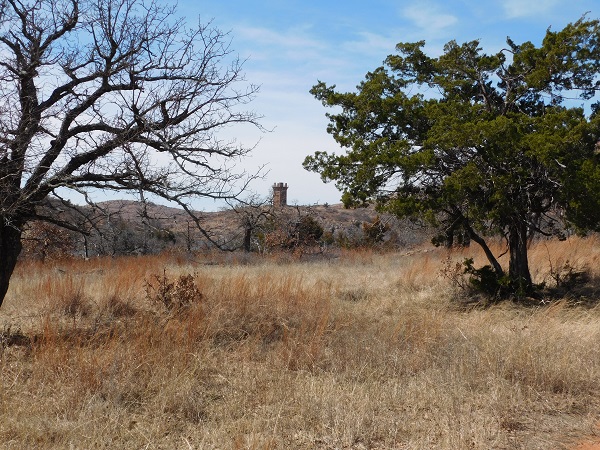 That’s it. That’s why I love this place. It is a tangible symbol of a spiritual truth. And it was my goal today. Now I had finally begun, and the path was straight and level. 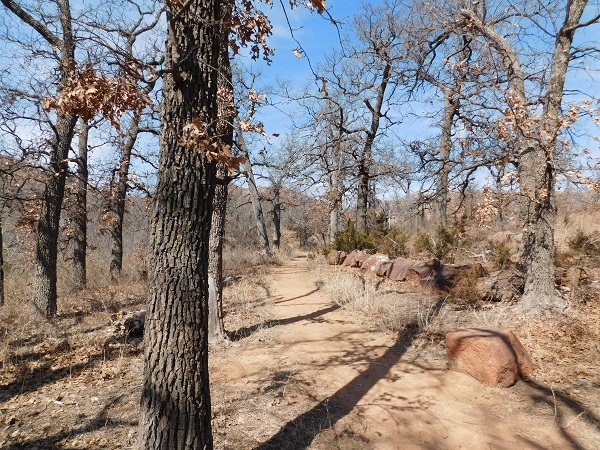 But starting out had to be a deliberate choice – despite my fear.

2. Some parts of the path are rocky.

To get to the tower, an elevation change is required. And, like any quest, you must endure some difficulty for growth. You must push on. There are 2 ways to do this: (1) Stare at the goal or the path ahead of you. (2) Watch where you put your feet. 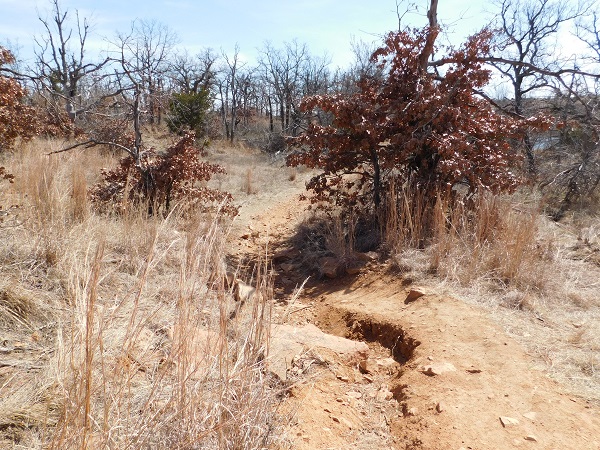 There I was: Alone. And not wanting a twisted ankle to derail any progress I’d made. So I chose careful foot placement. There are many loose rocks in the path in this section. Some as large as my fist. I would easily have landed on my backside if I was not careful.

Seeing God work is like this, too. Early parts of any new God-task require careful planning. We may want to jump in and run, but with limited vision or stability, we must be careful with every choice we make. If not, we could be forced to dust ourselves off and be derailed.

3. During rocky times, a clear view can spur you on to the goal.

When those quest moments are rocky, it sure is nice to pause and look around. You’re so focused on the path and finding the right “next step” that you MUST be deliberate to stop and look up. Don’t lose sight of the goal. The work is harder here, but you are now closer than you were. You have a new perspective — If you stop and take the time to check out the sights. 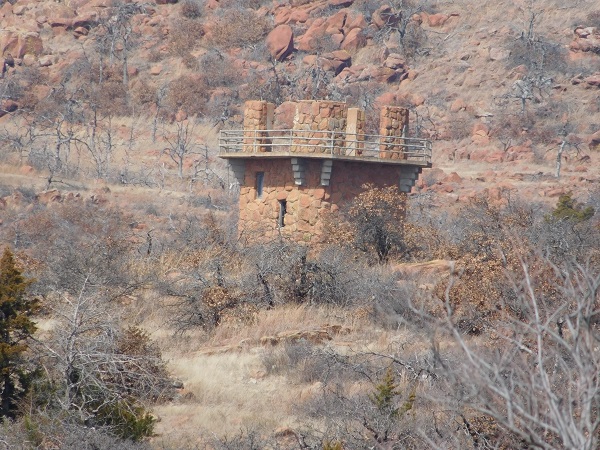 As in my last post, I mentioned how I’d been walking around with my head down for so long that I’d lost sight of the big goals. God wants us humble, but not defeated. Take time to look up.

4. When the goal is obscured, discouragement comes easy.

The next part of the quest is tougher. The path is less worn. Fewer people have made it this far. And when you do stop to look up, you can no longer see your goal. 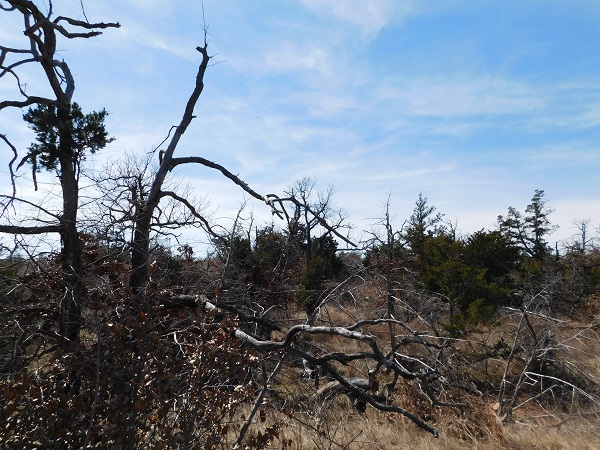 This is very disorienting. It makes it easy to give up. What’s the point? Why go on? I saw things. Most people don’t even get this far. I did stuff. It all counts, right?

This is the time where you have to dig in deep. You were called to do this. Do you have the faith to continue without vision? That’s what faith is, you know.

5. Press on, and you will catch a glimpse once more.

If you can dig in deep and keep putting one foot in front of another, you will eventually see your goal again. It may not be in full view. You may only get a tiny peek. But there it is. 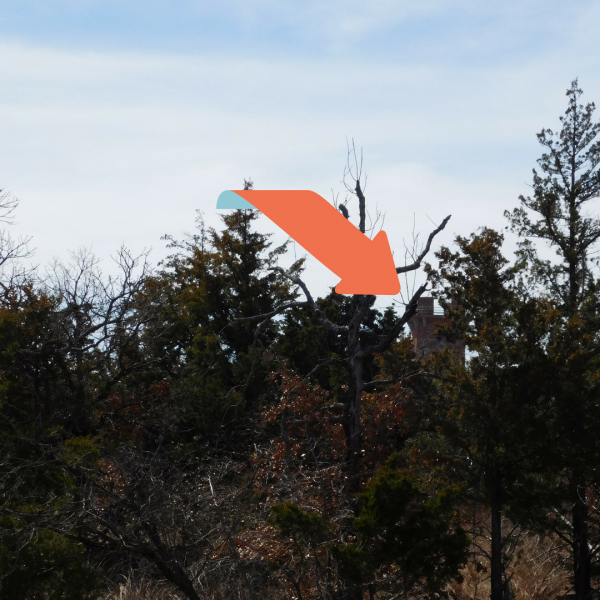 How do you see it? You move forward in the last direction God sent you. Then, since you cannot see, you stop more often and reorient yourself. Look hard. There it is – between the trees of life’s distractions. What a joy to find it again!

6. Avoid someone else’s mess. This is your quest.

Speaking of distractions, don’t get sidetracked by someone else’s mess. One thing that really irks me is being out in nature and finding trash left by someone who couldn’t be bothered to clean up for themselves. Don’t they realize that this is dangerous for the animals? For the environment?

Then it hit me. This is another way of getting off target. I could stop and clean up the trail, or I could continue on. I could gather things on my way down if need be. But my goal was waiting. I didn’t even pause to shoot a picture.

How many times have I been pulled off target by something that seemed productive or purposeful? That was certainly a slap on the back of my spiritual head.

7. You choose the ending: Goal Attained or Fearfully Declined

I paused at the small stream that signaled a hard turn in the path. 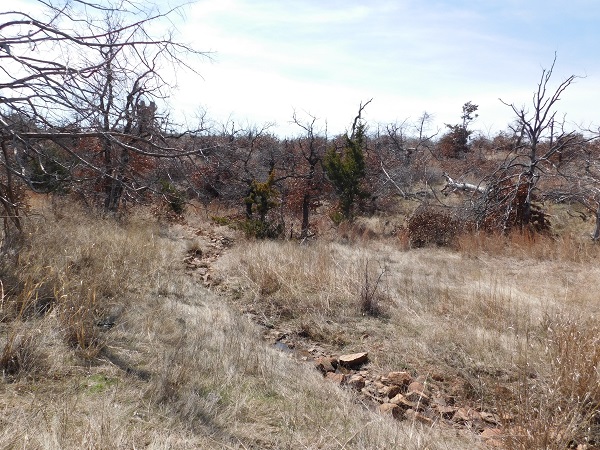 That’s when I head them.

The unknown number of loud and boisterous people who belonged to the car in the parking lot. They were yelling at each other and screaming. And they were getting closer. I was at a spot where there was no where to go to avoid them.

I knew what I would find beyond them. I’d been to the tower before. A wonderful view. Satisfaction at reaching the top. And my tower.

But that day I let my fear win. In a rapid conversation with God as the yelling neared me, I apologized for my lack of courage. I vowed to return another day and asked for a lesson I could share with you. God granted an immediate peace about my decision, and my feet practically flew down that path.

I didn’t stop to gather the trash.

I managed to drive away before the other hikers returned to their car.

What quest are you working on today? Comment below and let me know so I can pray specifically for your journey.

Thanks for stopping by. May you maintain sure footing on your quest this week.