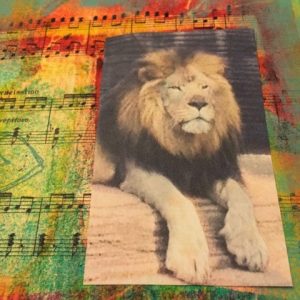 One of the things about March in Oklahoma is the unpredictable weather. Tuesday’s high was 59. Wednesday we had a major ice/snow storm. We’re expecting 70’s next week. It’s a crazy temperature roller coaster.

As we look at the Lion and Lamb this March, we will NOT be talking about the weather. We are approaching the most important season of the year for believers – EASTER. So, this month we’ll be exploring two aspects of our Savior’s character: Lion and Lamb.

Jesus is the Lion of Judah.

Jesus is the real deal. He is royalty, and the King of Kings is called the King of Beasts (Rev. 5:5), the Lion of Judah. Who could have the authority to open a sealed book that God holds in His Holy right hand? It is the Son of God.

Look at the photo above. I was thrilled to capture this picture last fall at the zoo in Columbia, South Carolina, mostly because it shows the size of his paws. I cannot fathom the strength in a lion’s paw. Could you imagine any predator that could rip something from it? It’s the size of a man’s head!

John 10:28 says, “I give them eternal life, and they shall never perish; no one can snatch them out of my hand.” If you see this verse in terms of the powerful lion’s paws, it takes on new imagery. And, for me, increased security.

Rest. You are safe no matter what nature – or life – throws your way.
The Lion of Judah has you.