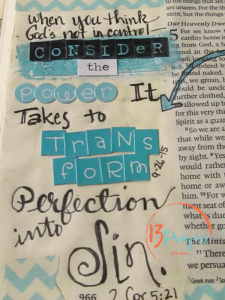 I have a confession: I’ve been known to assume there are times when God is not in control.

Fortunately, it’s not a constant condition. But it does show up from time to time.Usually, my lack of faith appears when life gets tough. It’s during a tough lesson that I think:

Imagine that. God had the power to transform His perfect Son into sin for my sin. And yours. How much power did that take? How hard was it to take perfection and make it sin. Every sin you can imagine. Every sin throughout history.

So, if God can do that, it would be a breeze for Him to fix any mess I find myself in, wouldn’t it? Yet I have to relearn this lesson more than I’d care to admit.

In that moment on the cross, when Jesus became sin, God was forced to turn His back because He cannot look upon sin. And I think that was tougher on Him than the transformation itself. This was His Son. His Son was beaten and killed, and it was because Father God had asked Him to endure it.

All because He loved you and me.

Action Plan: This week, take the situation that you are fretting over and turn it over to the One who has the power to transform perfection into sin. What lesson could you learn from that?

Thank you for spending time with me today. I spent time praying for you.