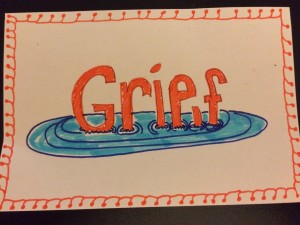 I was stuck smack dab in the middle of grief, and I didn’t even know it. I didn’t take the time to notice.

I had gotten through the death of my sister-in-law Penny several years ago. Then in late November of 2012, my other sister-in-law Desi died following a long illness. I was broken. I had really believed that God had healing available for her. That He could use her healing to bring others to Him. But He chose to bring Desi home to heaven. And grief found me again.

My mother came to the funeral on December 2. But before she could take her seat, she fell and shattered her leg. I spent most of the service in the back of the ambulance with her. I only came in to the service when I realized I didn’t have the house key to go pack a bag and change clothes before heading to the hospital behind the ambulance. So I missed most of the service and was very distracted while I was there.

Mother had surgery on her leg a few days later, and she was later released to a rehab facility. She was still there when my Father died 27 days later. I’m not their only child, but I live closer. So…many, many responsibilities fell to me over the next weeks and months. Mother had a second surgery in July. She ended up in a retirement center since she was unable to drive or walk. And I was taking care of things…but not taking care of myself. I had no time for grief.

Well, Mom moved home in October 2014 after almost 2 years. And suddenly I felt a weight lift. But the Sunday after Thanksgiving, my Mother-in-law’s house burned, and Hubby and I started planning for her to move in with us. In the midst of the emergency remodel and ramp building, we were also doing Hubby’s football thing and hoping for another state championship.

When flu kept me home from a Christmas visit with my Daughter, I had time with God. He opened my eyes to the number of hurting people and my own unresolved grief. As a teacher, He knew what would be the best way for me to learn about loss: He had me prepare to teach others.

He led me to create an online course for hurting souls called Good Grief. It will be opening soon. I would be blessed to be able to help you, too. There is more information here and a preview video below:

I am also moderating a discussion group for tender hearts at His Kingdom Come. Grieving Hearts is free as is membership to HKC.