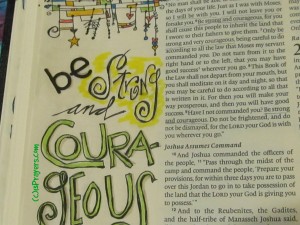 What would it take for you to do something that scares you? An invitation from God?

That’s what Joshua got after Moses died. Chosen as the new leader of God’s people, Joshua was actually commanded to be strong and courageous. Repeatedly.

Myth #1: Courage is the absence of fear.

No. Courage is the ability to press on DESPITE fear. In the face of fear. To see the need that is greater than the fear within yourself and DO SOMETHING.

Myth #2: Courage only comes to those who have been trained or prepared.

No. Fear can paralyze us from doing what God has planned for us. The average person isn’t going around thinking that they will be the leader of all God’s people and can defeat the inhabitants of the Promised Land. God promised these things to Joshua. Fear would have shackled him, and God’s will would not have been accomplished.

No. Joshua still faced difficulties. Including the struggle to convince the people he was trying to lead that God had promised to be with them to victory. Having courage doesn’t guarantee to be contagious to the other people who need it.

No. In Joshua 1, God commands Joshua to be courageous. The first time, the command follows God’s promise that He will be with Joshua and not leave him or forsake him. God repeats the command twice more in this single chapter.

What has God asked you to do?

Are you putting your faith in Him – or in the myths?

If you don’t need faith to accomplish things for God, then you aren’t doing everything He needs for you to do. Anything that you can do on your own is merely a grain of sand on the beach of possibilities for His Kingdom.

Your dreams need to be big enough to require faith. And courage.

Be strong and courageous.

In your first step of courage, list below something you feel God is asking you to do to be courageous. Step out of the shadows. Make it real. We’ll all pray for you!

Me? I’m spending this weekend in art classes in Texas. Two days learning more about Bible Journaling and other things with Stephanie Ackerman. I’m excited to see where God takes me next!