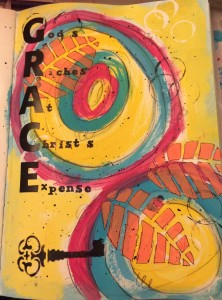 While the cross was the FINAL example of GRACE we will ever need, there are other examples sprinkled throughout scripture. Examples of God’s love providing a way out for those He calls His own.

It had never rained before, but God had Noah build a boat for a flood in a desert. God sent animals to go inside, and He allowed the animals (and people) to live inside for over a year until the waters receded enough to get off the boat. Oh, it rained for 40 days and nights, but they were locked inside for much longer. Good thing they had the boat though. Noah finished it just in time.

Out for a looooong walk with a few thousand of his friends, Moses came to a sea. God gave them all dry land to walk across and closed their exit just as the enemy approached. Timing is everything!

Poisonous serpents on the attack, but all can be cured just by looking up. Crawl out of your tent and gaze upon the snake that’s lifted high as a saving measure to all who will look. Just in time.

As Abe and Son climbed the mountain on one side, God sent a ram up the other side at just the right time. Of course He also grew a bush there years earlier at just the right place to catch a ram. He really planned ahead for that one.

There was breathable air in the whale’s belly. Probably fishy smelling, but that fish opened up just as Jonah was going down. Again – timing.