W is for War is the latest post in the Prayer A to Z series. The rest of this series can be found here. 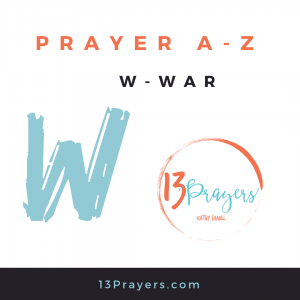 Arguably, the most famous War scene in scripture is David and Goliath. Now, I don’t know how long it’s been since you actually read that passage from the Word (and not just from a children’s storybook), but you can find it starting here. (1 Samuel 17:1+)

For 40 days, it had been a war of words. Goliath mocked Saul’s army and their God, and the men trembled in fear. Then a shepherd boy came to visit his brothers and killed the giant with a slingshot.

While there is only a single sentence prayer recorded in this passage, let’s looks at a few things together:

A. Teenagers haven’t changed much…

Scholars estimate David is about 12-15 at the time of the battle – not old enough to go to war. But when scolded by his older brother he responded like a typical teen, “What did I do now? I was only asking a question?” (1 Sam. 17:29)

David was the only one who realized this 9 foot-9 inch man had no right to defy the army OF THE LIVING GOD. Asking about this got him scolded, but he continued to ask why no one was stepping up to fight.

B. Success in the past…

As David continued to pester everyone to get out there and fight Goliath, he was brought before King Saul — and he volunteers! The king refused because he’s too young. But David recounted how he had protected his flock from a lion and a bear already.

Most of all, David continues to point out that the armies belong to God. Goliath mocked God’s army, so God won’t let that stand. The God who “delivered him from lion and bear will do so now.”

Saul offered David his own armor for the battle, but David refused this time. He stuck with what he knew. And this is how I know there was prayer before this pivotal moment in the war.

David was always a pray-er. Read his psalms. They are conversations with God. So a teen who knows God will see him through will no doubt be talking with his Heavenly Father about it. And he was prayed-up enough to recognize whose battle it was.

…Or a single stone.

It only took 1 stone to knock Goliath down, but David picked 5. I picture Goliath mocking and taunting with each stone the boy picked up. Part of me wonders if David picked 5 stones to fight or just to build suspense before he let the first one fly.

With 5 smooth stones in his bag, David listens to one last remark from his opponent. Then David’s statement says it all, “The battle is the LORD’s.”

To me, this is the prayer in the passage. David sums up whatever he had prayed silently with these few words. It was his way of stepping aside to let God fight for him.

Dear Father, thank you for prepping us for war. For fighting the battles for us when we are smart enough to step out of the way. Protect us from our enemy who hopes to terrorize us until we are too ashamed to face the battle. And help us to always remember: The Battle is Yours!

Thanks for stopping by. I know your time is valuable. You can find the other Prayer A to Z posts here.